The city of Atlanta is well-known for its historic relevance and diverse culture. The southern U.S. metroplex boasts some of the best entertainment and tourist attractions in the country, which attracts visitors from across the globe.

Many of those visitor attractions and event centers feature memorable, award-winning building designs. Here are a few of the projects on which Nydree was proud to collaborate.

The CNN Center is in what was formerly called the Omni Complex. After CNN television studios outgrew their headquarters in Atlanta, it was decided that the company would move into the mostly vacant offices in the Omni Complex in July of 1997.

The impressive downtown Center has seen many tenants over the years, including the Atlanta Police Department, a U.S. Postal Store, and a wide selection of restaurants and retail stores (and a Starbucks, obviously). The Center houses an Omni Hotel and the "longest freestanding (supported only at the ends) escalator in the world,” according to the Guinness Book of World Records. The Center sees thousands of visitors a day, and in a high traffic space, the flooring design has to stand up to extreme wear and tear. Flooring from Nydree gave designers from HLG Studio a stylish option that could be customized to fit the design of the space — one that will last decades. Designers used our Rift and Quartered White Oak flooring to bring warmth and texture to the interior of the space. The state of Georgia opened the Mercedes-Benz Stadium in August 2017, and it’s the home stadium for the NFL and MLS teams there. The total cost of construction for the project is estimated at $1.6 billion, and the design team spared no expense on style in the multi-purpose stadium.

Featuring contemporary art in both its interior and exterior design, the stadium is also home to Gábor Miklós Szőke's stainless steel sculpture, The Atlanta Falcon. At 41 feet high (and with a wingspan of 70 feet), the steel falcon is an impressive presence in front of the stadium. The stadium, known affectionately as “The Benz,” hosts multiple events each week and has a capacity for 75,000 visitors — although the 2019 Peach Bowl boasted a record of 78,347 people in attendance.

The Benz is impressive, and its luxury-focused design caters to the hundreds of thousands of visitors it sees each year. Nydree’s Rift and Quartered flooring supports the stylish ambiance of the stadium and is featured in the AT&T Perch section of the building, where event-goers can enjoy food, beer and a view of the game on several TV displays.

The look of hardwood is used in all types of spaces to invoke a welcoming feeling for its visitors, and Nydree’s Natural and Starry Night flooring offers the ambiance of wood design without excessive maintenance. 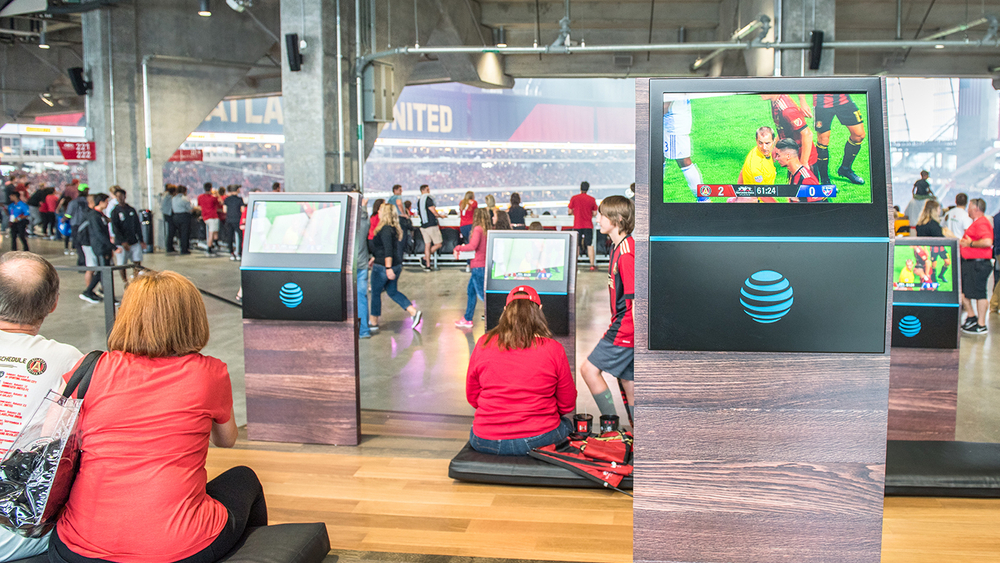 Five architectural firms presented proposals for the culturally significant project in 2009. The Center’s design was awarded to architect Philip Freelog and award-designing design firm HOK. The site spans 2.5 acres (the land was donated by the Coca-Cola Company), and the resulting design has made a broad impact.

Designers worked with Nydree Flooring to provide a solution for the museum that would maintain its appearance and durability over time. The custom Oak wood flooring offers an understated elegance to the space and helps to maintain design integrity throughout the building.

The Center was recently awarded a grant for an expansion, which “will provide the opportunity to scale the work around civil and human rights, elevating The Center to a national leadership role,” according to Atlanta United FC. Atlanta is one of Georgia’s hottest destinations and home to some of the most impressive public spaces and event centers in the nation. Nydree is proud to support the Atlanta community with beautiful design in spaces that families and visitors will enjoy for generations to come.

Nydree’s flooring gives commercial and residential architects and designers a flooring solution that will elevate any space. When you’re ready, we hope you’ll request a quote here.